In late 2016 and well into 2017, The Carmel Group spent hundreds of hours building and running two separate 80+ question surveys addressed to an exclusive base of members of the two U.S. BWA/fixed wireless trade groups, WISPA and WCA International. A response rate of more than double that of “normal”, “outside” surveys was achieved, capturing answers from 169 out of 555 trade groups’ operators, and 20+ of 44 trade groups’ equipment vendors. This one-of-a kind, unique data base would represent a value of several tens of thousands of dollars if it were capable of being recreated by others today (which it is not). Questions and charted and analyzed answers range from growth optimism levels, to expected vendor equipment and improvements, to licensed, unlicensed and “lightly licensed” spectrum expectations, to monthly churn, ARPU, and revenues. Additional information about ancillary services, challenges, opportunities, access and tranmission points is included, to name but a small few. 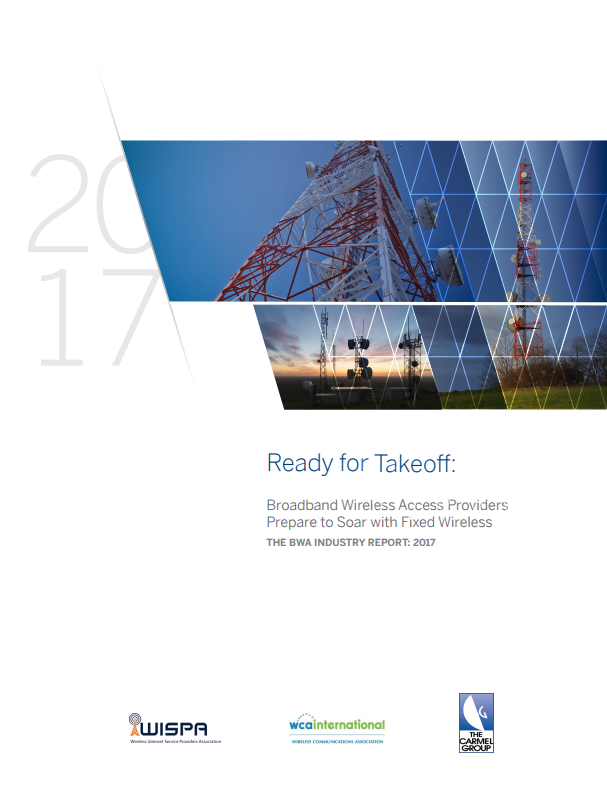 The sums received by CEOs at Dish Network, DirecTV, and Comcast (in order) reflect a more balanced ratio of compensation to corporate financial results than most other top-tier media barons, according to The Carmel Group’s new “Media Executive and Company Ratings Report.” (www.carmelgroup.com). The study shows that among ten of the largest publicly-traded media companies analyzed, CBS and Discovery Communications get the least CEO bang for the buck.

“Two companies that had almost zero customers 20 years ago [Dish and DirecTV], are today among the TV industry’s performance leaders,” said Jimmy Schaeffler, The Carmel Group’s chairman and chief service officer. “In this Chaotic New Age of Broadband and Over-the-Top (OTT) Competition, innovation and best business practices are the successful CEO’s ultimate contribution to corporate and shareholder success.”

Findings from the composite study and analysis for the years 2012 to 2014 identify the top performers and compound annual growth (CAGR) in the U.S. media sector. This group of ten companies accounts for $56 billion in average 2014 year-end equity. Financial metrics measured include average compensation, revenues, net income, earnings per share (EPS), market capitalization, and equity. Patents and other “innovation” benchmarks, as well as social and charitable contributions, were also considered.

The Carmel Group’s mid-year 2015 study, titled “Media Executive and Company Ratings Report”, includes research, charts, and analysis by M. Ben Jebara, PhD candidate at the University of Toledo, Ohio. For a full report, contact The Carmel Group at jimmy@carmelgroup.com, or 831 622 1111. The study price is $299.

Satellite 2010: Competitive Challenges By The Carmel Group’s Jimmy Schaeffler A handful of competitive developments emerged from the Satellite 2010 conference held March 15-18 in the Gaylord National Conference center, just south of Washington, DC, within the newly-built National Harbor facility. Several are worth noting for broadcasters, cablecasters, mobilecasters, and other actual or would-be opponents (or allies?) of satellite-based content providers.

The Carmel Group was asked to measure and compare the content and pricing of the two basic level pay TV packages, and the two mid-level packages, offered as of mid-February 2010, by DISH Network and DirecTV. 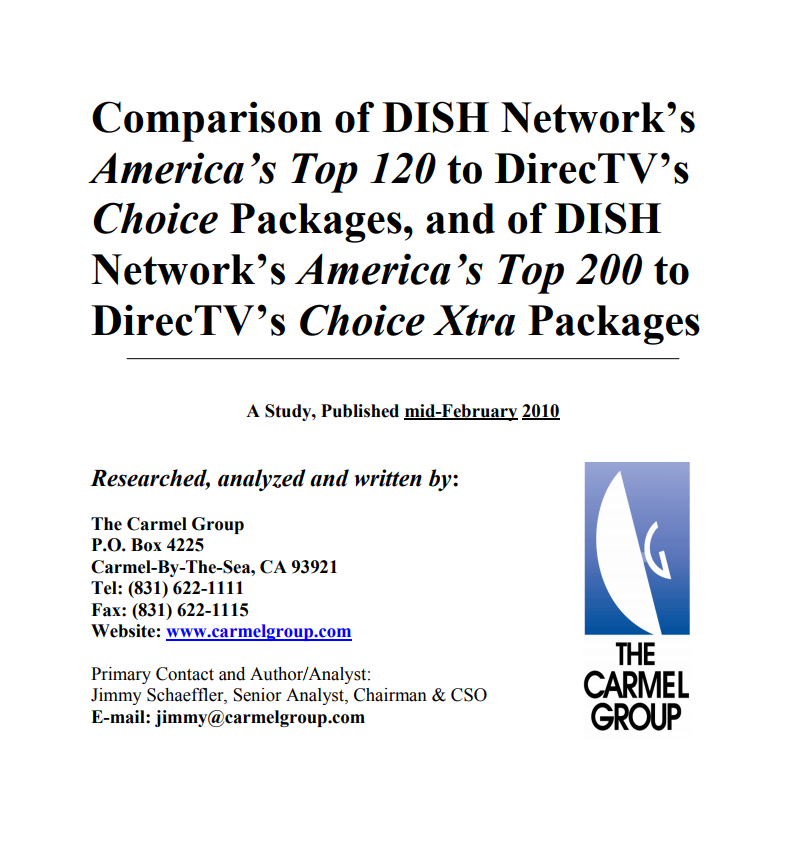 This study outlines the opposition to and the dire consequences from this so-called “merger,” especially as it impacts consumers, content providers and performing artists. This paper also contains numerous alternative recommendations for these companies and the future of satellite radio. 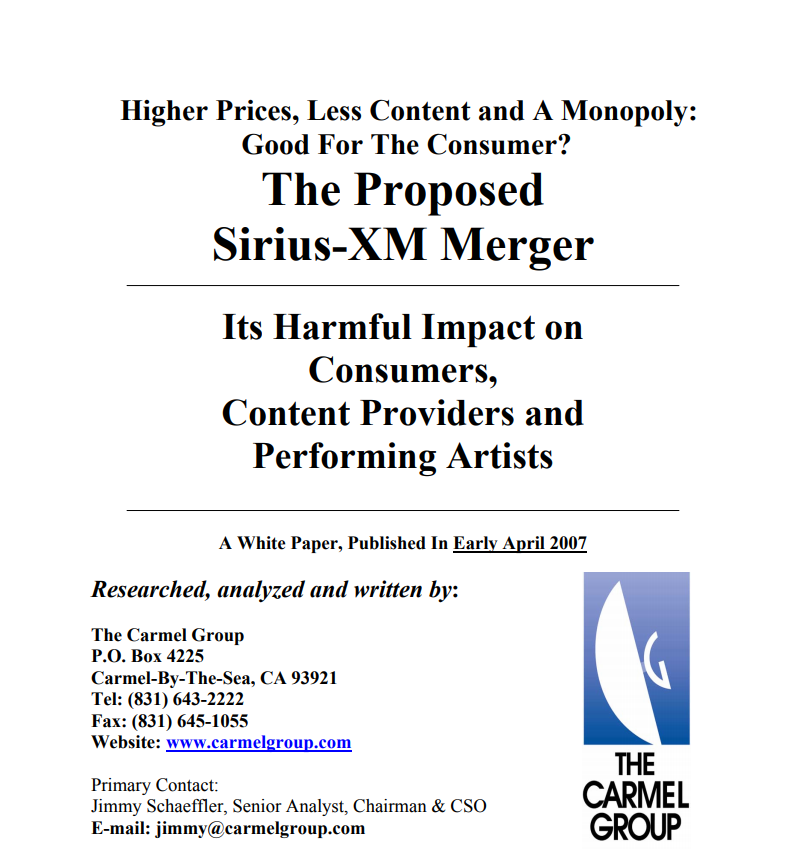 This comprehensive 2007 study is the product of three of The Carmel Group’s in-house databases. First is The Carmel Group’s historical archive, dating back to 1997-1998, when The Carmel Group was the first consultant/analyst globally to produce industry projections concerning the U.S. Digital Video Recorder (DVR) industry. Second is the combined historical data compiled from two surveys conducted in 2005 and 2006.

The data collected by The Carmel Group in May 2005 was based upon surveys of 2,586 U.S. respondents; the 2006 data collected by The Carmel Group was based upon surveys of nearly 1,800 U.S. respondents in January and February of that year. And finally, we focus on the current data from almost 2,200 U.S. respondents, from our 2007 survey that was run during February-March 2007. In both the 2006 and 2007 surveys covering the DVR and related industries, 76% were identified as DVR-Users, while 24% were Non DVR-Users. Also, in both those years, The Carmel Group received responses from respondents representing every state of the union and several U.S. territories. In addition, The Carmel Group interviewed dozens of key industry participants, focused on the developers and manufacturers of existing DVR products and services.

If you have more questions regarding the paper, please contact jimmy@carmelgroup.com