The race for fast Internet at 30,000 feet is accelerating as airlines roll out new technologies and speedier connections—offering more productivity for business travelers but also encroaching on a rare refuge from the wired world.

Gogo Inc., GOGO +0.73% the largest provider of inflight Internet in the U.S., on Wednesday plans to unveil a system that uses a combination of satellites and cellular towers, connecting airplanes to the Web at speeds six times as fast as its current best option.

Virgin America Inc. will launch Gogo’s new inflight Wi-Fi service in the second half of 2014 and says it expects to eventually upgrade its 53 aircraft with the product.

That comes after JetBlue Airways Corp. JBLU +0.54% received government approval last week to install a new high-capacity satellite link on many of its aircraft, an inflight Wi-Fi solution that can support streaming video to fliers’ devices fromNetflix Inc. NFLX -1.14% and Hulu, among others.

JetBlue, which has lacked inflight Internet, plans to launch the service on some aircraft this year and equip its entire fleet of 180 aircraft by the end of 2015. 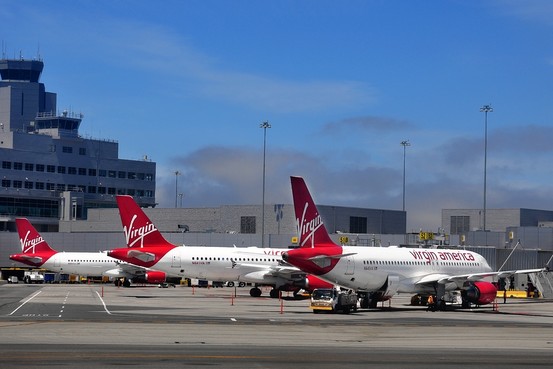 Virgin America will launch Gogo’s new inflight Wi-Fi service in the second half of 2014.

Gogo sets the prices for its onboard Wi-Fi, with options including $14 one-day passes and $50 monthly passes.

JetBlue said it is reviewing pricing for the service, but that basic Internet use initially will be free, while the airline will charge fliers for streaming content, which uses more bandwidth. Other airlines that provide Wi-Fi currently block access to streaming services like Netflix, to avoid cannibalizing their own fee-based inflight entertainment.

The new technologies could mean Internet speeds in the air that are at least as fast as the average Internet speeds for Americans on the ground—something that could help break down flier resistance to paying and make the service profitable.

Almost nine of 10 U.S. fliers said they think every flight should offer Wi-Fi, according to a survey of 2,000 people released last week by Honeywell International Inc., which makes equipment for providing in-flight Internet. Yet Gogo said about 6% of potential customers currently purchase its Internet on flights.

Tim Farrar, a Menlo Park, Ca., satellite-industry consultant, said the same lower-than-expected percentage has generally held steady across the industry, “there’s no indication of any dramatic shift” on the horizon and the trend could impede the swift growth that Gogo and rival services foresee.

Some blame pokey speeds for that gap between desire and purchase. Fliers must share bandwidth, meaning that speeds slow when more passengers log on. David Cush, Virgin America’s CEO, said that on average flights, about a fifth of its fliers pay for Wi-Fi, but that “it starts to top out at 30 to 35 users very simply because response time starts to degrade.”

Gogo says its new service will offer speeds of 60 megabits per second to each airplane, compared with 3 mbps on its original Wi-Fi connection, which 1,700 aircraft still use, and 10 mbps on an updated product launched last year, which about 300 aircraft have. Panasonic Avionics Corp., which provides Wi-Fi to about 2,000 aircraft internationally, says its speeds now average 5 mbps to 10 mbps.

The average Internet connection on the ground in the U.S. is 8.6 mbps, according to Akamai Technologies Inc., a network operator.

JetBlue is connecting its aircraft via ViaSat Inc.’s VSAT -0.74% satellites, the first time a commercial airline will use the higher-capacity Ka-band satellite spectrum, which some in the industry see as the future of inflight Internet. Gogo intends to use a different constellation.

JetBlue said its new service would provide speeds of 12 mbps to each flier’s device—not just the airplane, like on other providers. That model means “almost everyone on the airplane can enjoy that, not just one or two,” said Don Buchman, ViaSat’s director of mobile broadband.

Consultants said that JetBlue may be able to deliver high speeds to each device if several dozen fliers are just surfing the Web, but if users gravitate toward more bandwidth-intensive applications, JetBlue may find it hard to meet expectations.

Flights have been one of the few places that require people to unplug for a few hours. But since 2008, when AMR Corp.’s American Airlines flew the first Gogo-equipped commercial aircraft, the U.S. airline industry has rapidly expanded inflight Wi-Fi, connecting nearly 2,500 aircraft over the period.

Today, nearly 60% of commercial passenger aircraft in the U.S. are connected, not counting commuter jets, according to a Wall Street Journal survey of the nation’s 12 biggest airlines. That compares with about 35% two years ago. By the end of 2015, the airlines plan to have more than 85% of their mainline aircraft connected, including virtually all of the larger jets flown by the nation’s biggest carriers.

“It’s bittersweet,” said Jason Cupp, an independent management consultant from Kansas City, Mo., who took about 150 flights last year. “On one hand, it’s good because I get a lot of work done. On the other, [a plane] is the only space in literally my entire life where I’m not on the Internet.”

Matt Nevans, who travels more than 200,000 miles a year helping local governments set up email systems, said he is a loyal flier of United Continental Holdings Inc. But in recent years, as United was slow in adding inflight Wi-Fi, “I chose other airlines because I knew I needed to be online” during the flight.

Various foreign carriers have tried to focus on business travelers by maximizing connectivity on long-haul and intercontinental runs. But in some cases the revenue hasn’t been as hefty as envisioned, according to industry consultants, partly because many of those trips are overnight flights. There also are signs that short-haul flights may not be conducive to streaming video. Southwest Airlines Co. which specializes in such flights, originally agreed to have Row44 Inc., is a unit of Global Eagle Acquisition Corp., provide such content for a fee. But at least temporarily, the connectivity is now being provided free of charge as long as users watch a brief advertisement for sponsor satellite-broadcaster Dish Network Inc.

Gogo posted a loss of $70.5 million in the first half of this year. According to Mr. Farrar, Wall Street analysts expect Gogo’s revenue to climb to about $500 million over the next two or three years from an estimated $300 million in 2013. But plans to enhance Gogo’s hybrid network will cost hundreds of millions of dollars over the same period, according to industry consultants and analysts.

Jimmy Schaeffler, who runs satellite consultancy the Carmel Group, said hybrid satellite and land-based systems “still may have to contend with quality issues stemming from clouds, weather systems and other factors.”

Write to Jack Nicas at jack.nicas@wsj.com and Andy Pasztor atandy.pasztor@wsj.com

JetBlue is connecting its aircraft via ViaSat Inc.’s satellites, the first time a commercial airline will use the higher-capacity Ka-band satellite spectrum. Gogo intends to use a different constellation. An earlier version of this article incorrectly said Gogo intended to use the same constellation as JetBlue.